It’s 1900. Thirteen-year-old Issy McKelvie leaves school and starts her first job – very reluctantly – as a maid in an Undertaking Establishment. Issy thinks this is about as low as you can go. But something worse, much worse, is coming, as a very unwelcome visitor arrives in Australia.

It’s the plague, the Black Death, carried by the fleas on rats.

Issy loathes both rats and her father’s pack of yappy, snappy, hyperactive rat-killing terriers. But when her father becomes ill, it’s up to Issy to become an unwilling ratcatcher, and to join the battle to rid the city of the plague-carrying rats.

However, many things about the city’s control of the plague are not as they seem. Issy comes to realise that the real world is very different from the one she thought she knew… 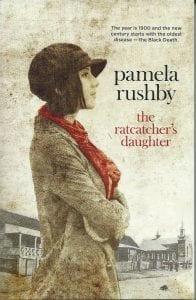